Champion Shoveler Still At It! 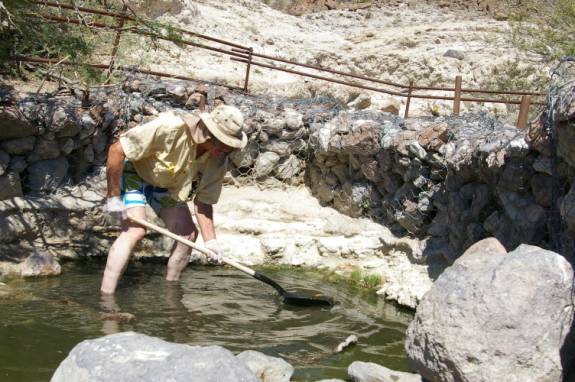 It all started when I asked the local project manager of the Society for the Conservation of Bighorn Sheep if there was anything he needed done.  He was so quick to answer, I should have played deaf and walked away.  It turned out, the task he had in mind involved me walking about a quarter-mile to a spring in the desert foothills and mucking out said spring.  The contents that had accumulated in the spring, he explained, was sheep excrement.  Yes, I know, who wouldn’t jump at a chance to shovel sheep shit out of cold water while biting flies attacked every bare spot you presented – a dream come true, right?
As it turned out, the next time I was in the area of the spring, it was winter so I passed on breaking ice and wading in the spring’s ingredients.  August of this year found me back in the area without an excuse to do the deed.
The walk in to the spring is not difficult.  The day was hot, but not beastly.  I had put together a pack that included swimming trunks, old tennis shoes, camera, towel, and enough water to drink and wash with after the activity.  There were a lot of sheep tracks on the way in, but no animals were encountered.
Beautiful Wife had been skeptical that I was actually going to wade into wet sheep crap and shovel it out.  She requested a picture of this lunacy.
Upon arrival, I traded my hiking togs for swimsuit and tennis shoes.  I had forgotten to take the remote control gadget for the camera necessitating the use of the built in ten-second timer.  I aimed the camera in the direction I wanted to shoot, focused on something in the approximate area I was going to be working, activated the camera, then ran through the spring and took up a pose.  This required many trials before a reasonable image was produced.  After completing proof of exploit for Beautiful Wife, I got down to the real reason for my being there.  It took about 30 minutes to complete the labor – scoop shit, slap flies; scoop shit, slap flies.
Finished, I cleaned up and changed back into hiking apparel.  Unbeknownst to me, California Fish and Game personnel had placed a camera adjacent to the spring to track use by the bighorn sheep (I found the camera as I was leaving the site).  One has to wonder how the minds at F & G will react when they review the video from the camera.  In the middle of all the footage of sheep drinking and defecating in the spring there emerges this old, gray-headed guy who takes off his clothes, puts on a swimsuit, sets up his camera, then cavorts around in the spring taking pictures of himself shoveling sheep shit.  Really, who the hell is that crazy?